How to make a T1 Crossover Cable

For years people have used the old and untrusty DB60 DCE to DB60 DTE cables to simulate WAN connectivity between Cisco Routers using WIC-1T modules; and what I mean by untrusty is that these cables have a tendency to go bad after you move them around a lot in a lab environment.


While the WIC-1T cards are extremely cheap, the DB60 DTE to DB60 DCE cables can cost anywhere between $5.00 to $15.00 each which can add up really fast in a lab that has more than 5 routers.

As for the WIC-1DSU-T1-V2, it will also work in the older routers with the latest Cisco IOS software.

Shown below is a picture of the WIC-1DSU-T1-V2 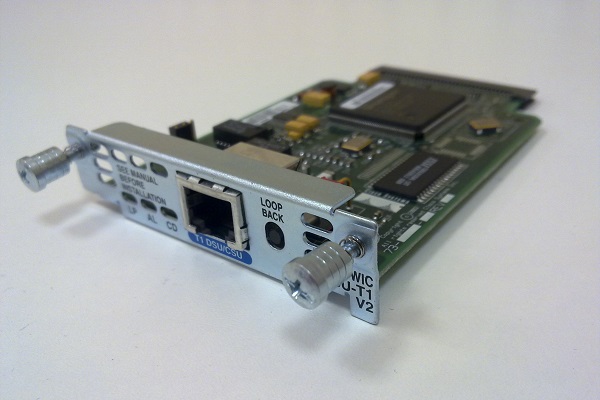 The difference between the WIC-1T and the 1DSU cards is that the 1DSU cards have an integrated DSU and does not require an external box to be connected via synchronous serial. The 1DSU cards can be cabled using standard unshielded twisted pair cable (Cat3, Cat5, Cat6, etc..)

Unfortunately a simple ethernet cable will not magically make the WIC-1DSU-T1’s cards talk to each other because the pin-out schematic is different than a standard patch or crossover.

You can make your very own T1 crossover for pennies on the dollar however you will need 2 RJ-45 jacks, some Cat5 cable and a crimper tool; all of which can be picked up at your local hardware store such as Lowe’s, Home Depot, Ace Hardware, etc… (If you’re in the United States).

And now for a fun fact… The most common color you will see used for T1’s in the industry is either white or yellow.

Before you start, it’s a good idea to modify the RJ-45 Jacks a little bit. Using a small flat head screw driver or pocket knife remove pins 3, 6, 7 and 8 from the jack so that it looks like this; 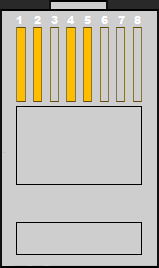 This way only the wires that are needed to be connected to the T1 WIC card are actually connected. Other wires in the RJ45 connector are not used for anything and this will also help you easily identify the type of cable in the future. Keep in mind this is not a mandatory requirement to make the cable, its just good practice.

Once the RJ-45 connectors have been modified you can then proceed to building the cable, one side at a time of course. In a standard T1 cable, wires 1,2 and 4,5 will be swapped at each end of the cable looking like the following; 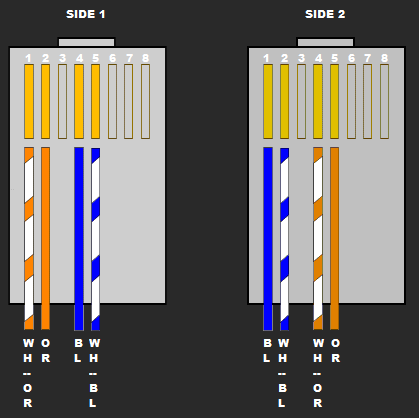 As for the color of the wires that go into pins 3, 6, 7 and 8; these can be any color you choose. Sometimes it’s easier to make the cable using certain colors in different spots.

Once the cable has been successfully crimped on both ends you can test it out between two WIC-1DSU-T1’s. If the cable was made correctly the CD (Carrier Detect) LED should light up on both WIC’s. At that point you can assign IP addresses to the serial interfaces and verify IP connectivity between the two WIC’s.

Below I have provided an example verification;

Hope this blog was helpful ^_^ Please be sure to share!

Number of Posts : 11
All Posts by : Matthew George