This lab will discuss and demonstrate the configuration and verification of

OSPF is the industry standard in internal dynamic routing protocols and it’s supported on nearly all vendor platforms. So what makes OSPF so special? It’s really the functionality and the hierarchical nature of the protocol in which it fits perfectly with modern networks.

However; in general, OSPF is a very large technological and configurational protocol. Meaning that there are books dedicated to OSPF design, implementation and configuration with 500+ pages but for the CCNA you’ll just need to know the basics which include in summary; single and multi-area configuration, link priority, DR/BDR Election, OSPF network types, stub area types, timers, default route propagation, route summarization and Link State Advertisements (LSA) Types. etc…

OSPF is a link state protocol and each router maintains a topology map of their configured area; however routers in Area 0 maintain the topology for the entire network, in which case backbone routers know of every single link and route. Just because a backbone router knows about the link does not necessary mean the router will use that link in the routing table. Many factors can take into play to manipulate the “best path” such as a distribute list, route maps or policy based routing.

OSPF was designed to support Variable Length Subnet Masking (VLSM) and a hierarchical network model by nature. All traffic destined between areas, also known as inter-area traffic must traverse area 0 which is called the backbone area. All area’s must have a single interface attaching the area to area 0. Routers that have these connections to Area 0 are called Area Boarder Router(s) (ABR’s). Any routers that connect an area to an external autonomous system are called Autonomous System Boundary Router(s), (ASBR’s). These routers connect OSPF to an external network such as the internet or a redistributed autonomous system.

OSPF does not use TCP/UDP to encapsulate its traffic but instead encapsulates the traffic into its own protocol; protocol number 89. OSPF sends multicast traffic packets have a TTL of 1 so they never travel further then 1 hop. OSPF uses the destination addresses 225.0.0.5 for all OSPF routers and 224.0.0.6 for communication between the DR/BDR (Designated Router and Backup Designated Router).

In OSPF, you can only summarize routes at an ABR/ASBR on the link facing the inbound towards the network.

The DR/BDR election winner is determined by one of several factors, whichever breaks the tie. OSPF Interface Priority takes precedence. By default all interfaces send hello packets with an OSPF priority of 1. If an interface has the OSPF interface priority of 0 then that router will never become the DR/BDR for that particular network segment. If all OSPF interface priorities match then the highest router ID wins. The Router-ID can be statically configured under the OSPF routing process configuration mode or it is dynamically determined by the highest IP address of a loopback interface. If no loopback interfaces exist on the router then the highest IP address of an active interface becomes the router-id for OSPF. For example; 192.168.0.1/24 is higher then 10.0.0.1/24

If a router comes online with a higher priority/router-id then that router will not preempt the DR/BDR role but will have to wait until a role change. DR or BDR failure. The Router Priority ranges between 0-255.

The DR’s purpose is to provide a central source for routing updates and to reduce traffic. All routers form a neighbor relationship with the DR/BDR but not between DROTHER’s (Non DR or BDR Routers)

For the CCNA exam you are required to know the six Link State Advertisement types listed below;

After having an understanding of the LSA types you must memorize the operations of different OSPF Area types as listed below;

Okay so enough with all the technology stuff, its time to get to the configuration!!!

Just like the previous dynamic routing protocols you’ll need to enable OSPF by executing the router ospf process-id# command in global configuration. The process id number is a locally significant process identification number and this does not need to match neighboring routers.

As previously stated; OSPF was designed to used VLSM so there is no auto-summarization to disable.

To specify which interfaces participate in the OSPF routing process you’ll use the network ip.ip.ip.ip wc.wc.wc.wc area # in OSPF router configuration mode where ip is the network ip and wc is the wildcard mask followed by the area in which that network belongs in. For example; network 10.90.23.1 0.0.0.0 area 23

In this lab you will configure the frame-relay interfaces on R1, R2, R4 and R5 to participate in OSPF area 0.

The following logical topology shown below is used in labs found through out Section 9 – Configuring OSPF; 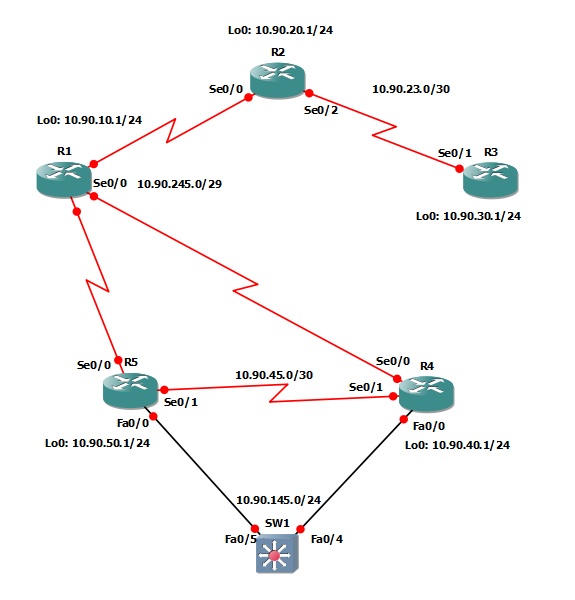 Due to the nature of OSPF, the default interface type for a frame relay interface is non-broadcast, in which case static neighbors must de defined. However configuring static neighbors will be discussed in the next lab. To fix this problem change the network type of the frame-relay interfaces to broadcast to allow for dynamic neighbor discovery as shown below;

Objective 3. – Verify that the spoke routers (R2, R4 and R5) have formed an adjacency with the hub router; R1.

As you can see from the neighbor table, R2 and R4 have become DROTHERS (non DR/BDR routers) and R5 has become the Backup Designated Router (BDR). As discussed in the core knowledge section the Neighbor ID (Router-ID) is derived from the statically configured ospf router-id or the highest ip address of a loopback interface or the highest ip address of a directly connected interface. Whichever comes first.

In a frame relay hub and spoke environment you ALWAYS need to have the hub router become the Designated Router (DR) due to the way OSPF operates. Think back to the core knowledge where you read that OSPF sends hello’s and updates using multicast with a TTL of only 1. This means that the traffic will not go further then one hop. So with this in mind lets say R2 became the DR and R5 wanted to send an update, it would have to send it to R5 but to get to R5 it would traverse R1 in which case the TTL would decrement to 0 and the packet would be dropped.

In the next lab you’ll learn how to configure the OSPF interface priority to ensure that R1 always becomes the DR and R2, R4 and R5 do not become the DR or BDR.