Most engineers do not take layer 2 loops as seriously as they should. Don’t get caught behind the curve when it comes to preventing accidental or intentional layer 2 loops in your network by not implementing BPDU Guard.

How much money would your company lose if your network had a 15 second outage? For anyone in the retail or transactional business this could equate to millions.

One of the biggest security threats to any network not because of an intrusion but because of an outage is from layer 2 spanning-tree loops. A single broadcast storm can cripple a 10Gigabit network in a matter of seconds.

Sometimes network engineers fight with enabling BPDU Guard due to the nature of its operation. It disables the port when someone plugs in an unauthorized switch to the network on the configured port. This configuration can be very frustrating in some environments where users want to add another device in their office so they just plug in a small consumer grade switch and magically their network drop in their office quits working.

If this individual happens to be an executive or a person of high respect in the office then their complaints could result in disabling BPDU Guard globally on the network which could indirectly lead to a network outage down the road due to their misunderstanding of the technology and the need to have such security precautions in place to prevent such a devastating outage.

Most network outages from broadcast storms happen from misconfiguration or accidental looping in the network. For example someone plugs in a small switch in their office and they plug both jacks in their office into this switch because they assume they’ll get double the bandwidth but a misconfiguration could possibly result in a short outage if the switch does not pass BPDU’s.

The majority of these types of problems are caused unintentionally however in the hands of the right perpetrator, this type of attack could cripple a network in a matter of seconds. 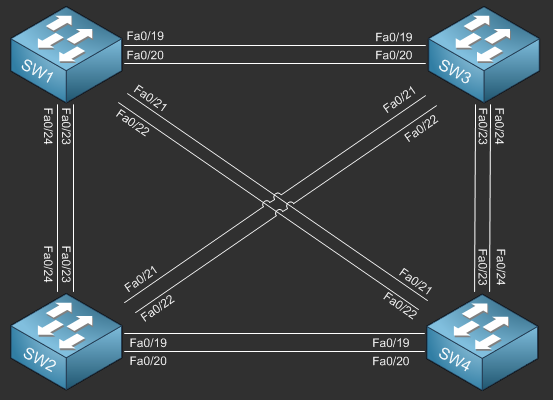 This lab requires real Cisco Switches. You can reserve lab time on the Stub Lab to have free access to Cisco Catalyst 3560 Series switches which can be used to complete this lab. To make things

easier you may load the initial configurations provided in this lab as a base config.

Objective 1. – Configure FastEthernet0/1 on SW1 to shutdown the interface if BPDU’s are detected.