EIGRP Stubs can be extremely useful when building a scalable EIGRP Routed network. This lab will discuss and demonstrate the configuration and verification of EIGRP Stubs.

The more routers you have the more queries you have and the more queries and latency you have the greater the chance routers in your network will become SIA (Stuck in Active), in which case any neighboring EIGRP nodes that does not return a query reply in the specified thread hold will be dropped and any routes learned via that neighbor will be also removed from the routing table even if the routes were up. So in a worst case scenario, such problems can result in your routing table automagically disappearing…

With all of this information brought to the table; does R5 really need to be queried regarding networks upstream when it only has one point of entry into the network? That’s a definite no. So R5 becomes a prime candidate to become a stub eigrp router in which case will receive all routes but only advertise connected and summary routes upstream.

When a router has formed a stub neighbor adjacency with another router, the stub eigrp neighbor will not be sent any queries so this effectively speeds up network convergence as now there’s one less router to query in case of a route failure.

There are seven different types of EIGRP stubs but the CCNA scope only coves the basic stub which is will receive all EIGRP routes but send only connected and summary routes. The list compiled below shows the different types of stub networks that eigrp can be configured as;

The CCNA exam objectives only requires you to be familiar with the basic EIGRP stub operation however if you wish to further your knowledge you may experiment with the other EIGRP stub types.

To configure the EIGRP stub type navigate to the EIGRP router process configuration mode then use the eigrp stub command.

You can verify which neighbors are stub neighbors by using the show ip eigrp neighbors detail command in privileged mode.

In this lab R5 is a branch office and R4 is a regional office. R5 only has a single network it routes for which is 10.80.50.0/24. You will configure R5 as an EIGRP stub router and verify your configuration.

This lab will continue to build upon the topology previously used in Lab 8-3 as shown below and other labs found through out Section 8. 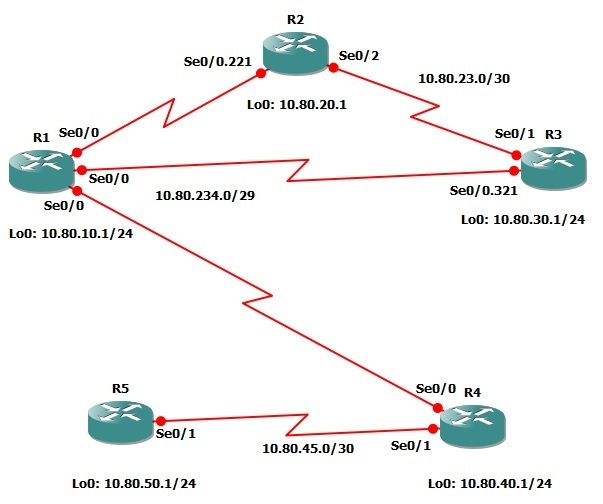 Objective 1. – Configure R5 as an EIGRP stub network to send connected and summary routes only to its neighboring router(s).

To view rather or not a neighbor is an EIGRP stub router use the show ip eigrp neighbor detail command in privileged mode as shown below.

As you can see from the output of R4 (10.80.45.2) shown above it is Stub Peer Advertising (CONNECTED SUMMARY ) Routes and below that shows “Suppressing Queries” This verifies that R5 is indeed an EIGRP stub router and that it is advertising only connected and summary routes and will not be queried upon EIGRP network re-convergence.