This lab will help you will identify the Cisco Internetwork Operating System (Cisco IOS) Running on a Cisco Device. Knowing what Cisco IOS Version and Feature Set is running on your Cisco devices is crucial to planning and deploying required features. Think of Feature Sets as Windows Vista Distributions, you have Basic, Home Edition, Home Premium, Business, Ultimate and Enterprise. In Cisco IOS, we have similar distributions called “Feature Sets” that dictate which features will be available for you to configure. Each feature set have different prices. Some feature sets contain the same features as others; this will be discussed later in the lab.

There are several ways to identify which Cisco IOS your Cisco device is running. First way being to examine the boot dispatch, this will display the image name that is loaded from flash which in return can be used to identify the IOS Version and Feature Set of the image.

Provided below is an example of the required dispatch from the boot process which can be used to identify which IOS Version and Feature Sets the router is currently loading.

Turn your attention to line 2 where you see C3620-IK9O3S7-M; this displays the features that are included in the image and the loading type (which will be discussed later) for the image that is currently be loaded by the Router. Following the feature set being loaded you can also see the Version of the IOS. As shown in this example, the router is currently booting IOS Version 12.3(25)

The most common way of obtaining IOS identification information is by using the show version command. This command shows various information pertaining to the Cisco IOS Version and Feature Set as well as hardware information about the router.

The textbox below shows the dispatch of the show version command.

As you can see lines 2, 3 & 4 are identical to previously discussed boot dispatch information. However take look at line 13 and you’ll see System image file is “flash:c3620-ik9o3s7-mz.123-25.bin” This is the actual image file name that is currently running on the router. This image name is very helpful in identifying the IOS Version and Feature set.

Below is a chart comprised of common pre-standing naming convention identification letters;

Now let’s break down the Features included with this image as shown below;

Many images differ in how they load and their compression. As these features are also identified in the image name below, the following chart will identify execution types and compression formats.

The example 3620 image used in this lab executes from RAM and uses ZIP compression.

Below is a feature tree comprised of the new naming convention used for Cisco router images 12.3T and greater; 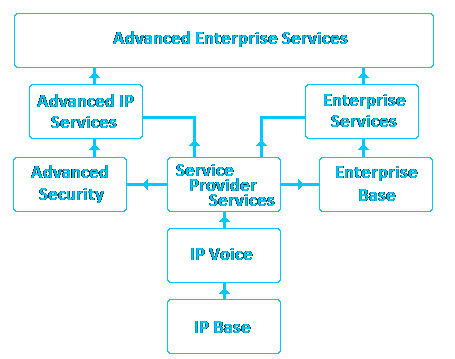 You can see that IP Base is the basic image, from this image it branches off into IP Voice, Advanced Security or Enterprise Base. 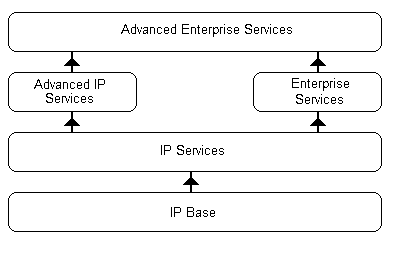 Below are some examples of images using the new Cisco naming convention;

Advanced IP Services is not available as a pre-installed license but is available as an upgrade license. This feature set includes IPv6 routing and IPv6 ACL support.

Below are a few examples of switch models you can purchase and the software license that’s bundled with the platform(s).

The Cisco Catalyst 2960 Series has a different license model due to the switch being strictly layer 2. The Catalyst 2960 Series license model is similar to the Catalyst 2950 Series which includes two separate feature sets, Standard Image and Enhanced Image however, the new feature sets are called LAN LITE & LAN BASE. These new feature sets do have a significant difference including Quality of Services (QoS), Gigabit Ethernet Support, RPS, Rapid Spanning Tree, Link State Tracking, 802.1x enhancements, DHCP Snooping and many more features which can be found on the Cisco website.

Cisco IOS 15.0 was released October 1st 2009 and with this new mainline IOS release, we’ll see the use of the Universal Image. The feature sets have not changed but now with the use of these new universal images, image feature sets have to be licensed using a license file stored in NVRAM. Upon boot, the IOS looks at this license file and activates the features specified in the license; that of which you’ve purchased.

Each license file is specific to each platform serial number so therefore license files will not be swappable. No doubt with all the Cisco IOS piracy that occurs in the Cisco networking world today, Cisco systems is losing millions if not billions in license profit.

The next generation Integrated Services Routers which include the 1900 Series, 2900 Series and 3900 Series will use a single universal image file and require feature sets to be licensed. As part of the license management suite, Cisco offers a license management server as well as an IOS feature that can automatically download the license file from Cisco if your router is able to access the internet.